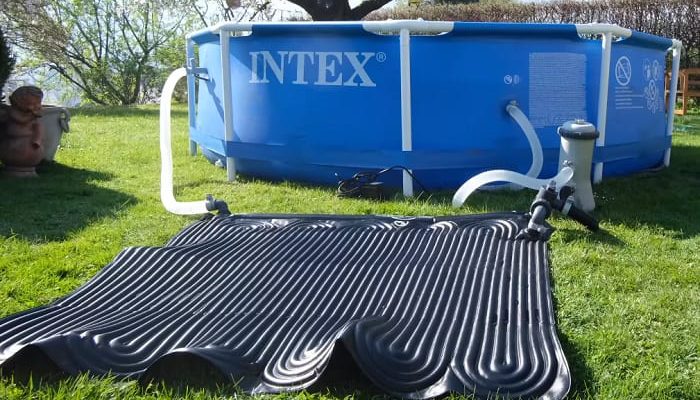 In business continuously since 1969, FAFCO Solar Water Heating has been making solar heating systems for pools longer than anyone else in the United States. As such, it should come as no surprise that the FAFCO solar heaters for in-ground and above-ground pools are of excellent quality.

Designed to raise the temperature of an 18′ to 24′ round pool by about 10 degrees Fahrenheit, the Solar Bear Plus System comes with a 4′ x 20′ pre-plumbed panel, two 6′ flexible hoses, and an installation tool. If your pool is larger than 24′ in any direction, you will need more than one Solar Bear panel to heat the pool; contact the manufacturer or a pool equipment retailer to help you size your system.

The Solar Bear Plus also uses a FlexFlo Valve that automatically determines the water flow, allowing the maximum sunlight exposure.

The Solar Bear Economy system is exactly what it sounds like: a less expensive, less extensive version of their standard Solar Bear panels. It still has the manual bypass allowing the system to be turned on and off, but the hoses and clamps are sold separately by the retailer. The economy version also lacks the FlexFlo Valve, meaning that your pool will take longer to heat with this model.

The Solar Bear “Jr.” is a small system designed for smaller pools. It will not be able to heat a pool in the 18′ range and over, but is a great option for someone with a small above-ground pool who doesn’t have space for large solar panels.

All three of these systems are backed by a ten year warranty, but in the case of the economy version, this is a pro-rated warranty – be sure to read the fine print.

FAFCO makes good products. Even though the Solar Bear systems are a little more expensive than their competitors’ products (the Solar Bear Plus starts at around $250), the extra money provides you with extra peace of mind and the value you can expect from an industry leader.

What are the Top Solar Heater Panels for Swimming Pools? As human beings, we are prone…

Like a regular water purifier, a pool cartridge filter uses a cylindrical filter to catch particles…

SunDance Energy Services, Inc., has been in business for over twenty-five years installing a variety of…

Hi! I'm Lauren and I love to travel. Follow along as I travel around the globe and share my favorite places.
Recent Guides
Copyright Total WordPress Theme - All Rights Reserved 2022
Back To Top
×Close search
Search